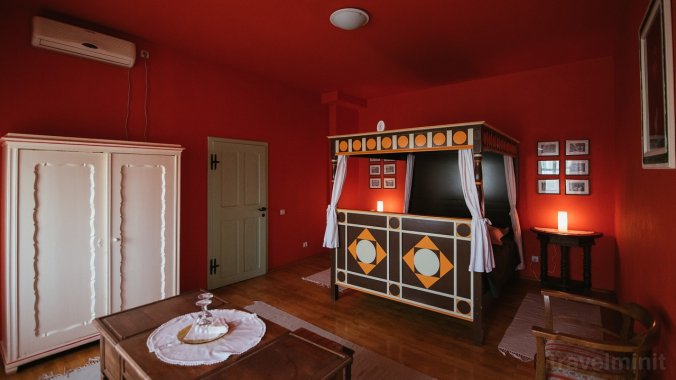 The Vörös Guest House is situated in the historic center of Târgu Secuiesc, opposite the Guest House one can see the statuae of Gábor Áron.

Reviews by real guests, who used Travelminit for booking

Orsolya
a year ago

Istvan
a year ago

The rooms and the apartman are situated on the 1 st foor they can house 14 people. The guest house has the highest standard and rank in the region. It has 3 stars. In our rooms we have air-conditioner, central heating, cold watter, bathroom,Tv, Wifi.

The facades of the buildings, which surround the centre were built according to the styles fashionable in the 2nd part of the 19th century and the beginning of the 20th century. Black Peral is an exception, because it was built in the 18th century, it`s crest is not parallel to the facades as in the case of other houses, but it is perpendicular to it.

Originally the building stood alone, proof for this is the stucture of the roof and the bays of the window used as wardrobes. Its facade was made after the fire in 1834, it has a Classicist style. The building is regarded as a monument and is protected by law.

The house was saved from final destruction by the Black Pearl. In order to save it, all the roof and floor had to be replaced.

This accommodation can be booked on Travelminit using tichet de vacanță or card de vacanță. *