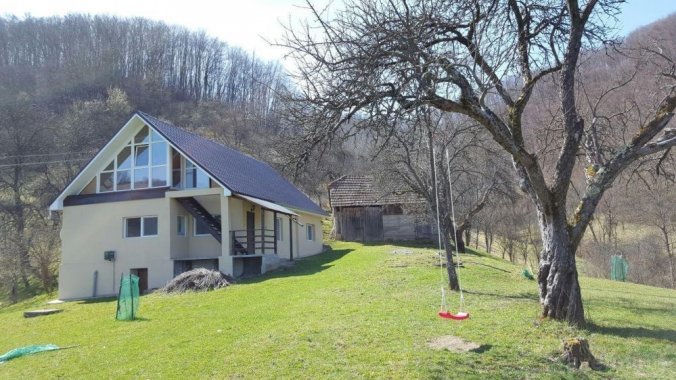 Lorău is on the northeastern edge of the King's Forest, along the Crișului Repede, at the mouth of the Valea Boiului in Bratca with fabulous view.

Lorau is located on the northeastern edge of the King's Forest, along the Sebes-Körös, at the confluence of the Boy's Creek (Valea Boiului) in the village of Bratca, with a fabulous view of the Kőrös Valley.

From the asphalt road to the house is a 700 m long rocky gravel road with two steep slopes. A person can also travel by car. Smoking is not allowed in the house, but it is allowed in the yard.

Top attractions in the area:

Révi Cliff - famous for its tall, snow-white rock walls and caves, as well as the waterfall and fairy tale here.

The Great Hungarian Cave of Vársonkolyos - is located at the entrance of the valley of the Méhsed River, 500 meters long and is probably the largest natural cavern of the mountains.

Cave of the Winds, Winds Cave - It is considered to be the longest cave in Eastern Europe, with a length of more than 50 km.

Stream of blood and its surroundings - with its interesting karst phenomena and countless caves.

The karst plateau of Damascus - with the Toaia sink system

Valley of the Ox - Waterfall of the Ox

Its hall and its caves

The valley of the Jád - the road DJ108J leads all the way to Bihor. On the way there are countless attractions including waterfalls and caves, not least the Lake of Les. Biharfüred is home to the Miracle Spring, which is actually the source of the Jad stream.

Acre Polia - the largest polish formation in the mountains. Nearby is the highest point of the mountain, the 1027 m high Moonring.

Biharrósa has many attractions to explore with its fascinating past, intriguing present and exciting future. Such as the White Canyon's many caves or the Albioara Strait.

A close system starting at Lake Vida; Strait of Vida, Holod Valley is the longest and perhaps the most romantic in the mountains.

Attractions and events nearby